How do Mast Cells Impact Our Patients Health?

What are mast cells? 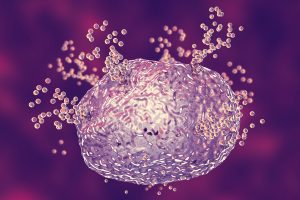 Mast cells are myeloid immune cells that are present throughout the body. They exist in areas that connect the external environment to the body, such as mucosal and epithelial surfaces, providing first-line defense. Connective tissue contains high amounts of mast cells. Inside mast cells are granules containing histamine, heparin, cytokines, chemokines, proteases, leukotrienes, and growth factors.1 Their primary mechanism of action is IgE-mediated allergic reactions through the FceRI receptor. When an antigen connects with a mast cell, it crosslinks two or more FceRI molecules, which activates the release of granules from the mast cell.2  Non-IgE mediated triggering of mast cells also results in the degranulation of mediators.

What role do mast cells play in the body?

Mast cells are an integral part of both the innate and the adaptive immune system, regulating other immune cells such as T cells, B cells, dendritic cells, macrophages, eosinophils, endothelial cells, and epithelial cells.1  Since they contain multiple different granules, they have many other physiological functions. Through the release of pro-angiogenic granules such as VEGF, mast cells are involved in increasing angiogenesis.3  Mast cells play a role in vasodilation, which is seen in different allergic reactions.  They also play a role in vascular and bronchial homeostasis.

Do mast cells cause allergies and asthma?

Mast cells release histamine, one of the primary chemicals in the body that induces allergy responses.  Histamine can cause vasodilation, bronchoconstriction, tachycardia, release of adrenaline, increased capillary permeability, and gastric acid secretion.  These mechanisms are involved in the symptoms seen with allergies, asthma, and life-threatening anaphylaxis.

What is histamine intolerance?

Histamine intolerance is thought to be from a deficiency in the gastrointestinal diamine oxidase enzyme (DAO) that breaks down histamine.4  If the enzyme is decreased, then there are increased amounts of histamine in the GI tract that can cause nonspecific gastrointestinal and systemic symptoms.  The DAO enzyme can be lower because of genetic causes and conditions that cause inflammation in the GI tract.5   Supplemental DAO enzymes can help increase the ability to break down histamine in the gastrointestinal tract but do not decrease the amount of histamine released from mast cells. DAO enzymes are localized in the digestive tract, as they are not systemic (meaning they do not impact mast cells throughout the body).

What is MCAS or Mast Cell Activation Syndrome?

Mast cell activation syndrome (MCAS) involves two or more organ systems with symptoms from mast cell mediators such as urticaria, gastrointestinal symptoms, tachycardia, and angioedema.6  The organ systems involved primarily include the skin, gastrointestinal, cardiovascular, respiratory, and neurologic systems, although any organ system can be involved.6  Diagnosis of MCAS can be difficult.  Lab tests such as elevated tryptase, histamine, and prostaglandin D2 can be helpful but are often only elevated during an acute flare-up, such as active urticaria. MCAS has been associated with other disorders such as POTS syndrome and Ehlers-Danlos syndrome.7 Many integrative practitioners also find MCAS can complicate patients with chronic infections and mold exposure.

How do you treat mast cell disorders and allergic disorders?

There are two primary ways to treat mast cells. One way is to decrease the IgE and non-IgE mediated activation of the mast cell so they do not degranulate and release histamine and other mediators. Histamine binds to receptors to start different functions.  The primary receptors are the H1 receptor involved in classic allergy symptoms found in smooth muscle and endothelial cells.  The H2 receptors are found in the gastrointestinal system. Other receptors such as the H3 receptor in the nervous system and the H4 receptor in immune cells are less well understood in terms of function. The other way to treat mast cells is using more natural methods.

How do you naturally decrease mast cell histamine release?

Flavonoids are a type of polyphenol compound that is found in many fruits and vegetables. Flavonoids and other polyphenolic compounds are known to have anti-oxidant, anti-inflammatory, and anti-cancer properties.8 Quercetin is one of the best-known flavonoids shown to inhibit the release of histamine from mast cells. It has been found to be a better blocker of mast cell degranulation, including histamine and cytokines, than the medicine cromolyn sodium.9 Fisetin, perilla, and luteolin are also flavonoids that have been shown to inhibit the IgE-mediated release of histamine from mast cells.10,11,12  Asthma can be triggered by mast cells, and the flavonoids fisetin and perilla have been found to suppress this response.11,13 *

How can you block the histamine receptor?

One of the primary pharmaceutical treatments of histamine effects is through the blocking of their receptors.  Classic anti-histamines for nasal allergies and skin issues are medicine such as Benadryl® (diphenhydramine), which blocks the H1 receptor from histamine.  If histamine cannot reach its receptor, it cannot start the cascade of events leading to allergy symptoms.

Gastrointestinal effects of histamine are from the binding of the H2 receptor.  Medicines that block the H2 receptor are often used for gastroesophageal reflux. Natural histamine blockers can be used to help with blocking the histamine effects.  Stinging nettle (Urtica dioica) has been shown to block the H1 receptor and decrease allergic symptoms.14 Nigella sativa, commonly known as black cumin, has gastroprotective effects, including healing the GI tract and decreasing stomach acid like an H2 blocking medicine.15   Research has also shown it to be anti-histaminic and anti-inflammatory and helps with other allergic conditions such as asthma.16*

Mast cells are very complex cells with both immunological and physiologic functions. The most well-known mediator is histamine which causes allergic reactions but, if not regulated, can lead to Mast Cell Activation Syndrome (MCAS).  MCAS is present often with other chronic diseases and can impact all areas of the body.  Fortunately, there are natural methods to inhibit the release of histamine and other mediators from mast cells and block the action of histamine by blocking the receptors throughout the body.