Molecular Hydrogen (two atoms of hydrogen combined into one molecule) is a powerful antioxidant that selectively targets the most toxic of free radicals, the hydroxyl group. The ability to selectively target free radicals is important as it means that it will not interfere with adjunctive therapies doctors may be pursuing.

In contrast to many antioxidants, hydrogen gas is able to penetrate the blood brain barrier. 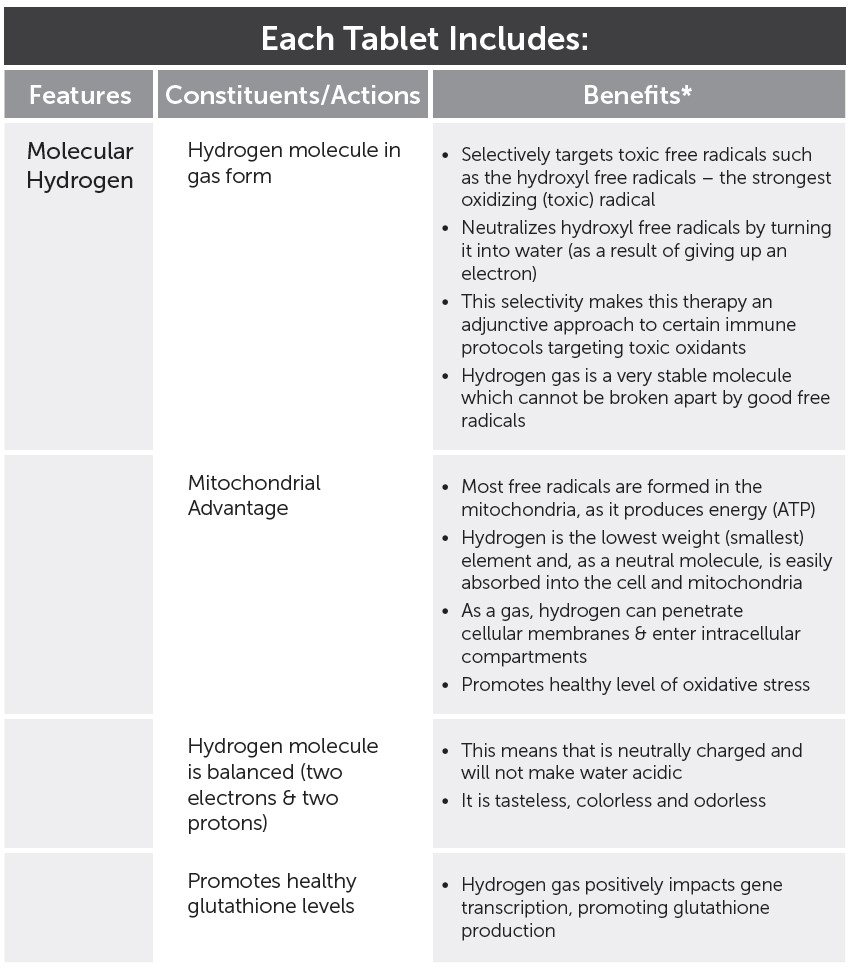 Suggested Use:  As a dietary supplement, place one tablet in approximately 8 oz of non-carbonated water, wait for tablet to dissolve and drink immediately.  Repeat twice daily or as directed by your health care professional. Product may be taken with or without food.

Caution: If pregnant or nursing, consult your health care professional before use.

Is it required to use a sealed container such as a water bottle with a lid?

No, this was the case when we first came out with the product.  However, our latest more advanced formula does not require a sealed container and can be used in a regular cup of water.

If you add hydrogen to water, does it make hydrogen peroxide?

What holds the two hydrogen atoms together in H2 Absorb™?

Do the matrix tablets in H2 Absorb produce the same kind of hydrogen water with negatively charged ions that the water ionizers produce?

The water is the delivery system for the hydrogen gas.  As the hydrogen atoms are covalently bonded (very stable bond), it does not change the taste, appearance, smell or structure of the water.  Hydrogen gas does not bond to or react with the water molecules so it does not alter the water pH.

Is the maltose of a gluten source?

No, the maltose does not come from gluten.  H2 Absorb is a gluten free product.