Introduction:  What is Candida? 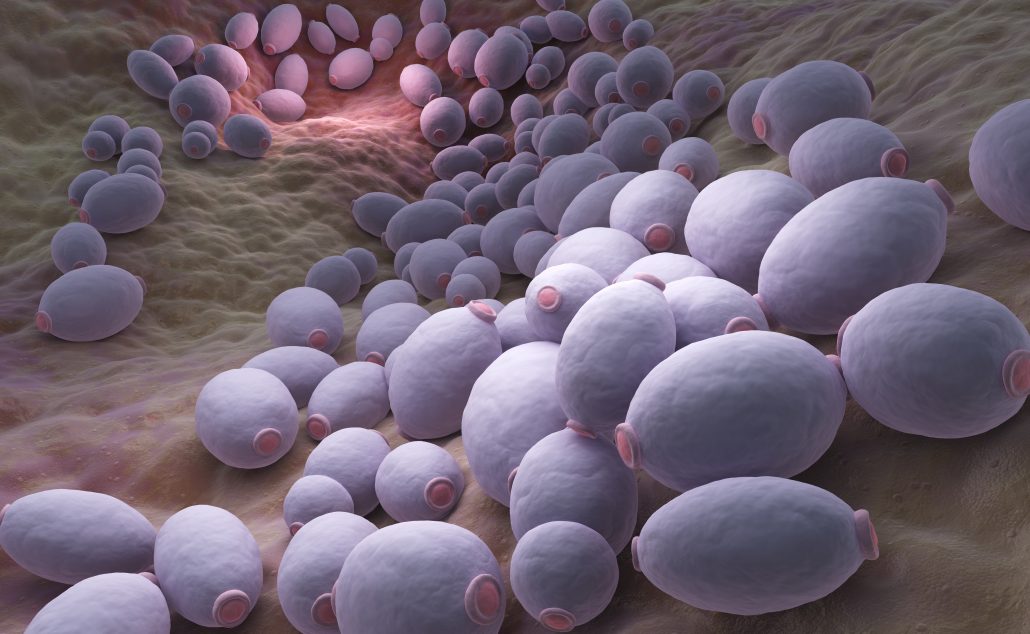 Candida is a group of yeast organisms, the most common being Candida albicans. This strain makes up approximately 75% of the Candida found in humans, where it exists in the digestive tract, the urogenital, and the respiratory systems. C. albicans is a commensal within the microbiome where it typically exists in small amounts. If Candida overgrows, the microbiome becomes imbalanced, leading to dysbiosis. Dysbiosis is commonly recognized in the digestive tract, with multiple symptoms often labeled as irritable bowel syndrome or IBS.

How does Candida impact the body?

When Candida is not kept in check, it can overgrow and create health issues. Candida has two forms, the yeast and the hyphal; both can be pathogenic in the body.1  The hyphal form is considered to be more invasive because it secretes hydrolases, while the yeast form is more easily transported throughout the body via the bloodstream.1,2  With the increased invasion of the tissues, the hyphal form can create biofilms and build antifungal resistance.3 Through these mechanisms, Candida causes problems in the digestive tract, the genitourinary system, and the sinuses.

What symptoms do you see with Candida overgrowth?

Candida symptoms are most recognized in several superficial forms. Thrush, an overgrowth of Candida in the mouth, is common and often seen in infants and those on antibiotics.6  Infants can also get Candida on their skin as a secondary skin infection in the diaper area. Vaginal Candida infections are a common infection for women throughout their lifetime. Systemic Candida infections frequently occur in immunocompromised patients, which requires intravenous antifungal treatment. Unfortunately, such infections have a high mortality rate.

Candida overgrowth areas such as the digestive system, which cause more general symptoms, are not as commonly recognized. The mouth is the top of the digestive tract, so it would make sense that the Candida overgrowth that we can identify as thrush can exist throughout the digestive tract. When not balanced by enough beneficial bacteria, Candida overgrowth in the gastrointestinal tract is often called dysbiosis. Dysbiosis can also exist in the sinuses and the genitourinary system. Small Intestinal Fungal Overgrowth (SIFO) is a cause of digestive symptoms such as belching, bloating, indigestion, nausea, and diarrhea.7  Increases in Candida with decreases in S. cerevisiae have been found in patients with inflammatory bowel disease.8

Candida overgrowth, in general, presents with non-specific digestive symptoms such as bloating, diarrhea, constipation, nausea, and indigestion and is often diagnosed as a functional bowel disorder (IBS). These digestive symptoms are often accompanied by other non-specific symptoms, including fatigue, brain fog, sinus and allergy issues, urinary frequency, and cravings for sweets.

What predisposes someone to get Candida overgrowth?

One of the most significant factors that increase the overgrowth of Candida is antibiotics. Even a single course of antibiotics in infants (who are in the early stages of developing their microbiome) can lead to an increase in Candida and a decrease in beneficial bacteria.9  Considering most people have multiple courses of antibiotics throughout their lifetime, this is a significant risk factor. The standard American diet or SAD diet contributes to Candida overgrowth and dysbiosis. The low fiber, high carbohydrate, and high sugar diet increases the risk of Candida overgrowth, whereas the classic Mediterranean diet with a high intake of fruits and vegetables and good oils helps prevent dysbiosis.10  Other factors that can increase the risk of a Candida infection include stress, other infections, poor immune system function, and medications.11

How do you test for Candida in a way that is helpful for diagnosis?

Various methods for testing for Candida overgrowth are used in integrative/functional medicine. Stool tests can detect elevated levels of Candida. The traditional stool tests would look for Candida under a microscope and attempt to culture it. One of the issues with that technology is that Candida can live in biofilms and, therefore, will not be found consistently in stool tests. Newer genetic stool tests look for DNA from Candida to identify overgrowth.

To bypass the issue of biofilms, urine organic acid tests can look for elevated metabolic toxins from Candida and other bacteria. Several markers, such as elevated tartaric acid and arabinose, indicate an elevated Candida level. These can be followed in a repeated measurement to determine if the Candida overgrowth is lessening.

Candida overgrowth is a common syndrome that can cause multiple gastrointestinal symptoms and non-specific symptoms such as fatigue and brain fog. Once the overgrowth is identified, an effective protocol may be developed to aid in the rebalancing the body’s various microbiomes.